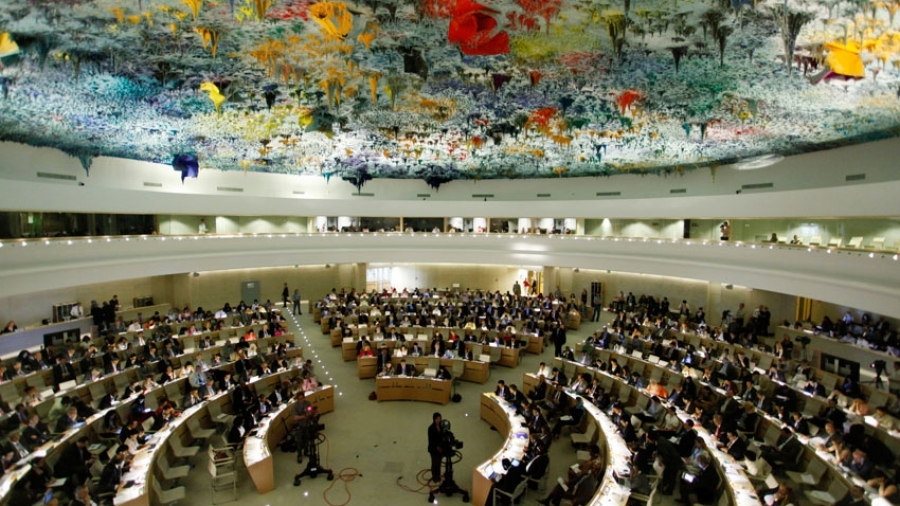 The United Nations (UN) Human Rights Council’s (HRC) 40th session took place from February 25th to March 22nd at the Palais des Nations in Geneva, Switzerland. Deprivation of liberty was an issue that the NGO Panel for the Global Study on Children Deprived of Liberty followed during the session, participating in the plenary sessions and side events, meetings with different stakeholders and conducting advocacy.

Annual Day on the Rights of the Child: Empowering Children with Disabilities, including through Inclusive Education

On March 4, the Human Rights Council held its annual full-day meeting on the rights of the child with a panel discussion focusing on empowering children with disabilities for the enjoyment of their human rights, including through inclusive education. The specific situation of children with disabilities placed in institutions was highlighted on several occasions by delegations and civil society participants as well as UN experts. Defence for Children International delivered a statement highlighting the situation of children deprived of liberty in institutions and the need for more disaggregated data and solutions.

On March 5, 2019, the Special Representative of the Secretary-General for Children and Armed Conflict, Ms. Virginia Gamba, presented her report on the abduction of children in armed conflict and children of or recruited as foreign fighters.

Ms. Gamba stressed that protracted and high-intensity conflicts, cyclical spikes in violence, and operations to counter violent extremism had continued to make children around the world the primary victim of war.  She singled out three trends that required attention:

Child recruitment and use by non-State armed groups raised new challenges from a child protection perspective, she stated. On children and armed conflict, delegations also highlighted their grave concerned that children in armed conflict continued to be subjected to appalling violations of human rights, notably recruitment, indoctrination and violence.  It was emphasized that continued access to safe education could help protect children and youth from the impact of armed conflict.  The reintegration of children was necessary to guarantee peace and security and break the cycle of violence.

The delegation of Austria mentioned the importance of the UN Global Study on Children Deprived of Liberty and thanked the SRSG and her office for their engagement in the Study.

Defence for Children International (DCI) delivered a statement on behalf of the NGO Panel for the UN Global Study on Children Deprived of Liberty. The Panel welcomed the report of the SRSG on Children and Armed Conflict and its focus on the abduction of children in armed conflict and children of or recruited as foreign fighters.  The statement highlighted the ongoing detention of children on national security grounds and call on States to continue to contribute to and support the development of the Study and its follow-up.

Side Event on the Impact of Counter-Terrorism Measures on Children

On March 6, 2019, Defence for Children International (DCI), Human Rights Watch (HRW), the Swiss Mission to the United Nations and the European Union delegation to the United Nations co-hosted a side event on the Impact of Counter-Terrorism Measures on Children including their deprivation of liberty. The event also focused on how these issues will be addressed by the UN Global Study on Children Deprived of Liberty.

The panel opened with the intervention of SRSG Gamba who presented her recent report to the UN Human Rights Council, which included a focus on the abduction of children in armed conflict and children of or recruited as foreign fighters.  Leo Ratledge presented CRIN’s recent study “Caught in the Crossfire” about the effect of counter-terrorism legislation on children calling for a safeguarding approach, not criminalisation. Jo Becker presented Human Rights Watch’s new report  “Everyone Must Confess:” Abuses against Children Suspected of ISIS Affiliation in Iraq.” She reinforced the message that rehabilitation is key.

The participation of Professor Manfred Nowak focused on the Study and its preliminary data. He expressed concerns about broad legislation in the area of national security. Prof. Nowak stressed that children should only be tried through juvenile justice systems and that a peaceful reintegration avoiding deprivation of liberty is key. He reminded participants of the legal framework on deprivation of liberty of children and made links to the Sustainable Development Goals, particularly 16.2 – End abuse, exploitation, trafficking and all forms of violence and torture against children.

The panellists agreed on the need to adopt a human rights approach emphasising the effectiveness and importance of prevention and rehabilitation. They also recognized that children should only be tried through juvenile justice systems and that peaceful reintegration avoiding deprivation of liberty is key.

The panel was followed by an interactive question and answer session. SRSG Gamba stressed the importance of the Global Study and the support of her office for its development. She noted that the Study will help to address the lack of data and information on deprivation of liberty. Professor Nowak concluded the event noting that the Study will include recommendations regarding all the different types of deprivation of liberty of children and non-custodial measures.

She called on States which had reservations to article 14 of the Convention on the Rights of Persons with Disabilities –calling for the elimination of the deprivation of liberty for persons with disabilities – to lift them.  She urged states to adopt a rights-based approach and to find alternatives to deprivation of liberty in the community. States should approach that question from the rights-based perspective.  Community-based responses could be found, and they greatly improved the quality of life for persons with disabilities.

During the session, the UN Office of the High Commissioner for Human Rights presented its report on the protection of human rights and fundamental freedoms while countering terrorism. The 2019 report focused on children, including child victims and witnesses of terrorist acts, children at perceived risk of recruitment and children associated or suspected of association with terrorist groups. It emphasizes that children in all such situations must be considered and treated as victims of terrorism.

The report highlights that deprivation of liberty of children should only be used a measure of last resort and for the shortest appropriate time, in line with international standards. It emphasises that formerly associated children who are detained should have access to any necessary rehabilitative health care and psychosocial support, as well as reintegration programmes, both in detention and upon release.